Showing the WORLD women love sneakers, one lace at a time

“There are a lot of new women and young girls who want to start skating, and that’s definitely a completely new thing to happen. All at once, we’re getting a ton of little girls out to our lessons and the majority of them are four to seven-years-old… So, there’s a lot going on all at once with this whole movement of the skate community.”
~Stephanie Battieste

ATTENTION! Lieutenants she.lace are reporting for duty in the army of empowerment. Today’s mission is to show the world how strength in numbers can yield an army of support, AND vice-versa.

Yes, we at she.lace can certainly think of ourselves as being part of an army. As is the case with any efficient army, we have a well defined (wo)mandate which is enacted by our missions/projects. Perhaps more importantly, we comprehend the paradox that: We are only as strong as our divisions, yet we have NO divisions. Do you believe this to be a true sentiment, affirmative or negative? If you have your doubts, we wouldn’t be surprised or offended. BUT, allow us to show you civilians what we mean by showcasing our highly decorated General: Stephanie Battieste.

a subdivision of an army, typically consisting of a small number of infantry battalions and/or other units and often forming part of a division.

Why are we providing this definition? Well, we want you to be knowledgeable about a critical term that pertains to General Stephanie. This valiant soldier is responsible for the creation of one of the most profound brigades she.lace has ever witnessed: Babes Brigade.

“Babes Brigade is a women’s skateboarding brand and group founded by Stephanie Battieste in July 2015. After spending countless years skating at her local skate parks, usually as the only female, Stephanie began to start seeing more and more girls skating.”
~Babes Brigade

This is how it began a little more than three years ago. Stephanie was simply engaging in her beloved hobby, skateboarding, when she started to notice a discernible increase in the amount of other females coming out to skateparks. Like a true leader she started brainstorming on how she could cultivate this growth. The thing that makes this truly inspiring is that Stephanie wasn’t motivated by a desire to increase her comfort level per-se. She’s doing/did this for the betterment of all those women and girls who are hesitant to “kick, push and jump” into a male-dominated activity. After all, an army of support always proves there’s strength in numbers. Stephanie is about to flex her support, enjoy!

Here’s a little more with the Founder & Creative Director of Babes Brigade, Q&A:

Babes Brigade is a very interesting name, how did the name come about?

Stephanie: Babes Brigade was kind of like a spinoff of “Bones Brigade” which is a Men’s skate crew [who] kind of like are the original OG’s of skateboarding in the 70’s — I originally wanted to be an art director. So if something of a catchy idea would come to mind I would always store it or write it down because I was like “maybe that could be a cool commercial or company name”. So before I ever even knew something like this was going to happen, Babes Brigade was something that came into my mind and clicked. And I feel like it kind of rolls off your tongue, so that’s why it stuck. It was something that was in my memory bank and when the time came it made sense.

You mentioned being a Toronto-native, can you describe for someone who doesn’t know what the skate community is like?

Stephanie: I feel like the skate community has really developed a lot in Toronto over the past —I’d say — five years or so. There was a new addition, the Toronto Skateboard Committee, which works with the City of Toronto. Which clearly is the only way to get things done in regards to getting parks made and really showing a need for it. So, ever since the TSC was invented and established a lot has gotten done. There’s also a whole movement of the DIY skate community, so like building your own parks. It’s not something the City likes but it also reiterates that there’s a need for it. There’s a lot of work do be done and it will take time, but for the first time in the 10 years that I’ve lived down here I’m actually seeing a lot of things happen very quickly.

Let’s play a game of word association. In the context of skateboarding for women, say the first thing that comes to mind:

Inclusion: Non-judgment of your fellow group members
Opportunity: Using the resources that are presented to you because I’m trying my best to give opportunities so it’s up to you to take it or not
Empowerment: Feeding of each other through inspiration.

What’s your favourite part about being a teacher?

Stephanie: Everything is my favourite part about being a teacher because, it’s funny, like I said I went from fashion and advertising to thinking “I wish I went to school to be a teacher”. I actually love working with kids, absolutely love it! So that might have been the biggest awakening inside myself, that I didn’t really know was there.

Yesterday’s @babes_brigade Girls youth lessons were a blast! Looking forward to another week teaching @skateloft skate camp! You can register for full day or half day options at www.SkateLoft.com ✨ thanks for the photo @nicolepolifroni #babesbrigade #skateboardingisfun #toronto #girlsshred @vans @girlsshred

Stephanie loves kids and she loves vans! So, here’s a seemingly random question, is it considered ironic to do something “new & innovative” in an “old skool” way

Vans Old Skool, one of the most iconic silhouettes from the “Off The Wall” brand. Can a sneaker that’s 41 years-old with a plethora of styles and colourways still be called “Old” though? Of course it can, especially when we still have trailblazers like Stephanie using them for function as well as fashion. This classic was the first skate shoe offering from the Van Doren Rubber Company to have leather panels. Here’s another fun fact, the sidestripe that’s synonymous with Vans was a casual “doodle” originally called the “jazz stripe”. And the Old Skool…  referred to as “Style 36”. Vans Old Skool will continue to be a fan favourite, on an off the board. 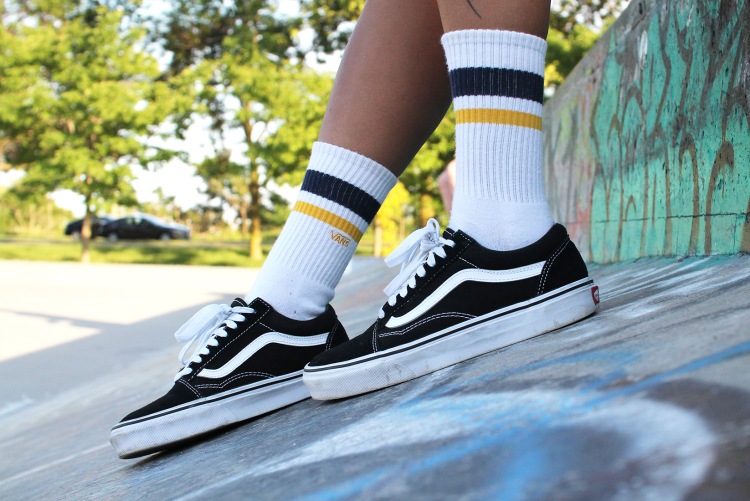 Sidenote: Vans is renowned for their themed collaborations! We hope you didn’t sleep on the recent Vans x Marvel capsule collection. Well, if you did…no worries, redemption is in sight. Vans will be bringing us a limited collection celebrating the 90th anniversary of the beloved Mickey Mouse. Four different artist, 4 different visions!

Skateboard lessons, parties for young girls, events, casting and consulting… just to list a few of the things Stephanie administors. Just know this, behind every good General is a great army:

“Through her journey she [Stephanie] has teamed up with many local female skaters who are also talented photographers, videographers and designers. These women contribute greatly to the group. We have an entire community of women supporting each other to make this all possible.”
~Babes Brigade

Babes Brigade’s Skate Team consists of nine exceptional women who truly embody the goal of the organization. They graciously give their time, energy and expertise to help teach women and girls how to skateboard and, more importantly, that breaking barriers can start with rolling down a skate ramp.

BABES SKATE JAM 4 @skateloft was amazing! We taught so many lessons to girls and women, had a contest, enjoyed some free food and goodies from @elfurny and @vanscanada // Thank you to all of the @babes_brigade ladies who taught lessons!! I’m so proud of all these amazing females supporting eachother in a multitude of ways 🤘🏽📷 @cameralady_ @blackumbrellaphotography #babesbrigade #metrogrammed #toronto #skatergirls #skateboardingisfun #community #vansgirls

Needless to say, Stephanie has a radiant network helping her with this important initiative. What started off as casual weekly meet-ups at Toronto skateparks has grown to a brigade who help one another in every way imaginable. Who knew that her background in fashion, art and design would have to take an indefinite hiatus for her passtime. But, that is what brings us to a common attribute with visionaries… it’s not usually what they’re “looking at”, it’s HOW they look at it. Stephanie seized an opportunity to combine her skills, aptitudes and passion in Babes Brigade. And the results have been nothing short of amazing. she.lace and Stephanie have a lot in common when it comes to the topic of support. The most noteworthy, a large part of our motivation comes from the mindset that there’s strength in numbers. Lookout for Stephanie as she continues to fearlessly lead her brigade on their quest to empower, create and skate. That’s the kind of mission that deserves the highest honours, service medals and meritorious decorations.

Hi, welcome to she.lace! Get ready to tie up those sneakers and take a walk down the road of empowerment.