Showing the WORLD women love sneakers, one lace at a time

“As women we get bogged down with so many extra stresses, I find. There’s the idea that we need to look a certain way because of the way social media works. There’s the idea that our bodies need to do certain things, that we need to believe certain things and act certain ways. And yoga is truly identifying what works for you because when you’re doing it you move at your own pace, you move how you want to move… I just hope that we, as woman, can find our own flow.”

Namaste! Greetings…we come in peace and solidarity spreading good vibrations and positive energy. Technically, the expression “namaste” (or namaskar) is a traditional Indian greeting and gesture of respect. Which, of course, is accompanied by the action of bringing one’s palms together before the chest or face, and bowing graciously. Many cultures and traditions perform, and hold sacred, their own version of namaste (e.g. the discipline of bowing in Eastern Martial Arts). The specific act may have many variants…BUT the essence of the message holds constant and is shared: respect, humility, knowledge = clear mind, clear spirit, clear soul. Allow us to put this in easy to digest modern “she.lace vernacular”…when you learn how to get in tune with your inner-self, your outer-self will begin “Flexing on Life.”

Speaking of flexing…namaste is an expression that, arguably, has transcended its traditional roots (in terms of global use). It’s still very much associated with Indian culture, but it is tethered to a little practice known as yoga. Now, we’re not going to attempt to tell you the philosophy of “what yoga is, or what it means” because that would be too arbitrary (besides, we have our lovely model to do that). What yoga means to a person spiritually should be individualized. HOWEVER, dictionary.com gives a very good explanation of the methodology and aim of yoga:  any of the methods or disciplines prescribed, especially a series of postures and breathing exercises practiced to achieve control of the body and mind, tranquillity, etc. In other words, YOGA allows you to literally and figuratively flex on life! 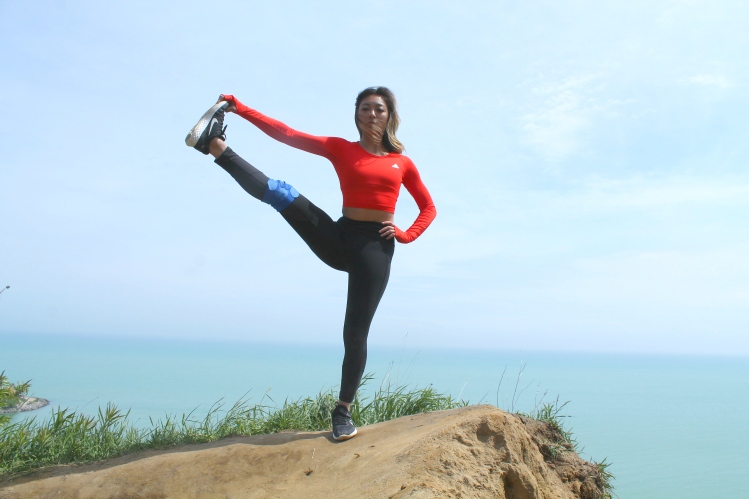 Don’t mind Marielle, she doesn’t mean to put all of us who can’t even TOUCH OUR TOES while standing up to shame (*cough, cough…don’t judge us). Believe us, it is definitely NOT in her nature to engage in any activity that deliberately flaunts her talents at the expense of making others feel inadequate. She’s not flexing on us…she’s “Flexing on Life.” As we can all see, Ms. Marielle “intrepid” Torrefranca is flexible…to say the least. Actually, in both the literal and figurative sense saying Marielle is flexible is a huge understatement. BUT, there’s one thing she’s very “rigid” about…and it involves a very nuanced game of semantics. Notice a few lines up we used the word “activity” when describing Marielle’s flexibility?! Well, she wants to make it clear that Yoga is a PRACTICE not merely an activity. Practice! 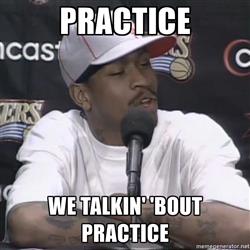 Not that kind of practice…practice as in the application of an idea, belief(s), methodology, tradition. You know what… Marielle explains it much better, listen up.

there were some O-M-G moments during this shoot when we saw first hand (and leg..out stretched haha) how Marielle commands a stillness while practicing yoga. It’s not much of a “stretch” to assume this is a source of empowerment for her.

So who is this Yoga Queen who knows how to build from within? For starters, an AMAZING human being. Here’s the best way for us to analogize Marielle, she’s like a tree. More of a metaphor than an analogy…but let us explain:

Here’s how this avid hiker and all around nature-enthusiast connects her many “branches” for a unified purpose.

Well, we would tell you to “put down your phones” and “give Instagram a rest” but…yeah, you continue to go right on reading and liking those she.lace photos ;). BUT, Marielle has a solid point about unplugging and truly engaging with yourself. This is, and will always be, the best way to flex on life. It may not come in the form of hiking at high-altitudes in the Inca Quarry Trail – a trek through the Andean mountains and the Sacred Valley near Ollantaytambo, Peru, or camping at Canada’s Banff National Park, or doing Yoga at Toronto’s Scarborough Bluffs…but find your own escape. You can’t truly start flexing on life until you exercise the most important muscle in the body, the mind. And, the “reps” for this muscle exercise start with sense of self.

If you haven’t ever seen or been to the Scarborough Bluffs in Toronto’s east-end, feast your eyes. For those who have had the pleasure, have The Bluffs ever looked as nice as this?! So, where do we find this beautiful gem of nature? In the southwest part of Scarborough…you know that part of Toronto made famous by the outro on Drake’s “From Time” record:

Well, The Bluffs have been one of the most serene and breathtaking sights in Toronto “from time G”. With the willingness to travel to Midland Avenue and Kingston Road (followed by a quick 2-minute drive or 10-minute walk downhill) you could be astonished by this spectacle of nature. Toronto boasts many picturesque locations along the shores of Lake Ontario, and the Bluffs is somewhere near the top of that list. It stretches for about 15 km along the shoreline (which includes 11 City of Toronto Parks) and, at some point, rise 65 metres above water. So, how did The Bluffs form? According to the City of Toronto: The Scarborough Bluffs are a significant geological feature resulting from the accumulation of sedimentary deposits over 12,000 years ago. They were formed by the natural processes of wind and water erosion from Lake Ontario.

So, why did Marielle risk “life and limb” to model for she.lace? Well, we promised her amazing natural scenery and…a burger! Aside from that:

If you haven’t already gleaned from her smooth responses, allow us to state that Marielle is quite adept with answering (and asking questions). Mainly because she’s a fabulous journalist with the CBC (The Canadian Broadcast Corporation), and because she’s just phenomenal. Nowadays, she fancies herself as a Senior Writer for the National News program, News Network, with a 3 a.m. start. Yes, 3 a.m.

!!! With that being said, we’re talking about a young lady who had a stint as an on-camera reporter within her first year in the industry (no small feat). Cue the Demo Reel:

So, waking up for work at a time when most people are enjoying their REM sleep is just another “stretch in the park” for this lady. Journalist, Blogger, vlogger, intrepid traveller…simply remarkable. Give her a task, consider it done! Insinuate she might not be able/capable of accomplishing something new…Well, don’t take it personally when she gets the task done, probably in record time, all while giggling good-naturedly and then asks you if “there’s anything else she can help with?” Oh, and that “I told you so: smirk she’ll flash on you…that’s not an aura of arrogance. No, no that’s her humble brag while she is “flexing on life”.

For she.lace, our method of flexing on life is by utilizing women’s love for sneakers as a conduit for women’s empowerment. Yes, James Brown told us that “This is a man’s world. But it wouldn’t be nothing, nothing without a woman…” like Marielle. This is how she feels about how she.lace flexes. 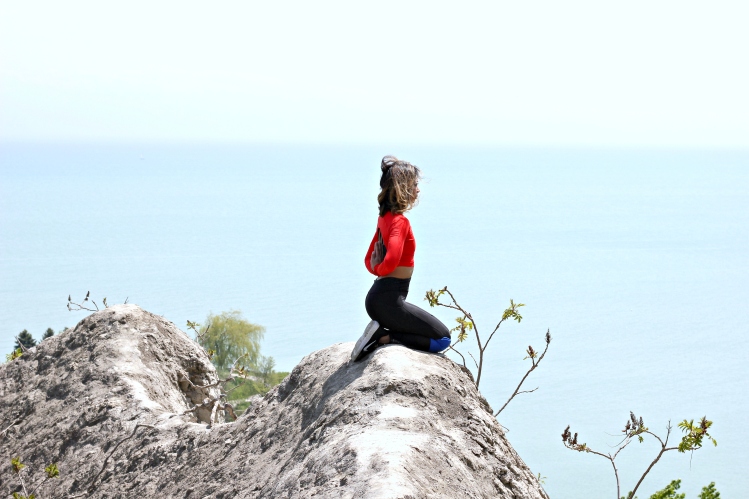 Yoga, meditation or hiking may not work for everyone as a method of finding a measure of stillness or relaxation and that’s just fine. It’s referred to as a sense of self for a reason! Whatever it is, just ensure it’s gratifying and fulfilling. After all, the only thing better than looking good while you’re flexing on life…is actually enjoying whatever it is you’re doing. Ms. Torrefranca has just the strategy for us.

Next week we’ll school you on how to study…in style!

Hi, welcome to she.lace! Get ready to tie up those sneakers and take a walk down the road of empowerment.